Wandering Around an Albuquerque Airport Terminal


After learning my flight was detained 4 hours,
I heard the announcement:
If anyone in the vicinity of gate 4-A understands any
Arabic,
Please come to the gate immediately.


Well -- one pauses these days. Gate 4-A was my own
gate. I went there.
An older woman in full traditional Palestinian dress,
Just like my grandma wore, was crumpled to the floor,
wailing loudly.
Help, said the flight service person. Talk to her.
What is her
Problem? we told her the flight was going to be four
hours late and she
Did this.


The minute she heard any words she knew -- however
poorly used -
She stopped crying.


She thought our flight had been cancelled entirely.
She needed to be in El Paso for some major medical
treatment the
Following day. I said no, no, we're fine, you'll get
there, just late,


Who is picking you up? Let's call him and tell him.
We called her son and I sp…
Post a Comment
Read more


Two morning stars, Venus and Jupiter,
Walk in the pale and liquid light
Above the color of these dawns; and as the tide of light
Rises higher the great planet vanishes
While the nearer still shines. The yellow wave of light
In the east and south reddens, the opaque ocean
Becomes pale purple: Oh the delicate
Earnestness of dawn, the fervor and the pallor.
—Stubbornly I think again: The state is a blackmailer,
Honest or not, with whom we make (within reason)
Our accommodations. There is no valid authority
In church or state, custom, scripture nor creed,
But only in one’s own conscience and the beauty of things.
Doggedly I think again: One’s own conscience is a trick oracle,
Worked by parents and nurse-maids, the pressure of people,
And the delusions of dead prophets: trust it not.
Wash it clean to receive the transhuman beauty: then trust it.
Post a Comment
Read more

Allen for all to see (and see all)! 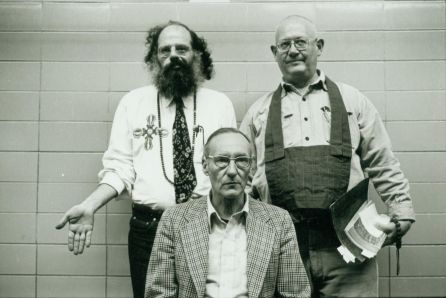 Buddha Death, I wake with you
Dharma Death, your mind is new
Sangha Death, we'll work it through

Father Breath once more farewell
Birth you gave was no thing ill
My heart is still, as time will tell.


If I were doing my Laundry I'd wash my dirty Iran
I'd throw in my United States, and pour on the Ivory Soap,
scrub up Africa, put all the birds and elephants back in the jungle,
I'd wash the Amazon river and clean the oily Carib & Gulf of Mexico,
Rub that smog off the North Pole, wipe up all the pipelines in Alaska,
Rub a dub dub for Rocky Flats and Los Alamos, Flush that sparkly
Cesium out of Love Canal
Rinse down the Acid Rain over the Parthenon & Sphinx, Drain the Sludge
out of the Mediterranean basin & make it azure again,
Put some blueing back into the sky over the Rhine, bleach the little
Clouds so snow return white as snow,
Cleanse the Hudson Thames & Neckar, Drain the Suds out of Lake Erie
Then I'd throw big Asia in one giant Load & wash out the blood & Agent Orange,
Dump the whole mess of Russia and China in the wringer, squeeze out
the tattletail Gray of U.S. Central American police state,
& put the planet in t…
Post a Comment
Read more

A Supermarket in California

What thoughts I have of you tonight, Walt Whitman, forI walked down the sidestreets under the trees with a headacheself-conscious looking at the full moon.
In my hungry fatigue, and shopping for images, I wentinto the neon fruit supermarket, dreaming of your enumerations! What peaches and what penumbras! Whole familiesshopping at night! Aisles full of husbands! Wives in theavocados, babies in the tomatoes!--and you, Garcia Lorca, whatwere you doing down by the watermelons? I saw you, Walt Whitman, childless, lonely old grubber,poking among the meats in the refrigerator and eyeing the grocery boys. I heard you asking questions of each: Who killed thepork chops? What price bananas? Are you my Angel? I wandered in and out of the brilliant stacks of cansfollowing you, and followed in my imagination by the store detective. We strode down the open corridors together in oursolitary fancy tasting artichokes, possessing every frozend…
Post a Comment
Read more


I speak of love that comes to mind:
The moon is faithful, although blind;
She moves in thought she cannot speak.
Perfect care has made her bleak.

I never dreamed the sea so deep,
The earth so dark; so long my sleep,
I have become another child.
I wake to see the world go wild.
Post a Comment
Read more
More posts